After not Fly fishing for nearly 20yrs I was invited to fish as a guest at one of Colne water A.C waters in 2018 and as a result I made the choice to apply for a season ticket for 2019. Having attended the 2019 AGM and paying my subscriptions I ventured out in March to remember if I could still cast a fly. The casting part is still improving, depending on how strong and in which direction the wind is coming from. However, something I do still remember is how to tie wind knots while casting a fly.

So come March I ventured to Churnclough to find high water and waves. I decided to try a sinking line and a few different lures from my old fly boxes. The result was 3 Brownies to 16 inches in a couple of hours.

These brownies were quickly unhooked, photographed and returned to swim away to fight another day.

So I felt pleased with my early efforts after so long without casting a fly line.

It took a while to tempt my first Rainbow, but that finally came to a nymph one evening where I must have landed on top of a shoal as I had 10 Rainbows in as many casts, which was a big surprise to me as well as the fish. I took the near sunset photo as a reminded of this first magical evening of fly fishing.

Over this first month I’ve spoken to lots of fisherman, listening to stories and gathering information on the water. Such as Learning about its history and the extremely low water levels during 2018.

I’ve counted and reported Cormorants on my catch returns slip in March and spoken with the United Utilities ranger. but it seems that on my recent visits the Cormorants have gone!

Here’s too many more trips and stories from those I meet. 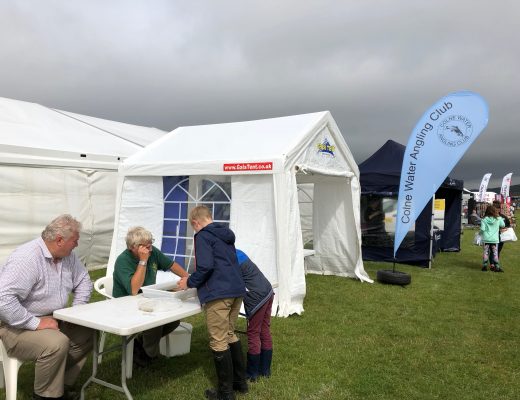